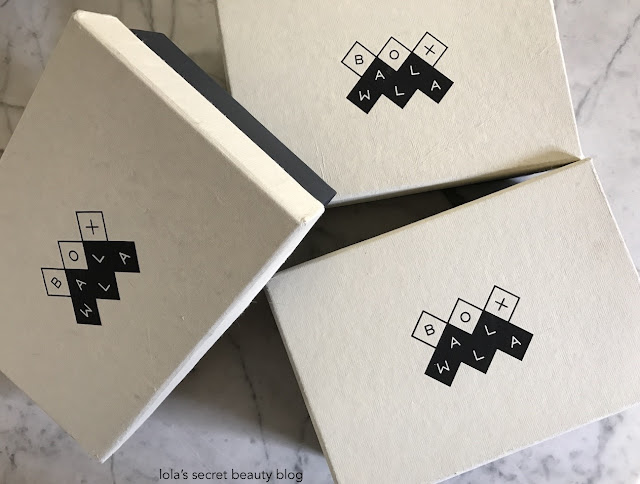 That I have already waxed poetic about Boxwalla's visionary Green Beauty Boxes can easily be seen in my reviews HERE and HERE. However, as I mentioned in passing, Boxwalla also offers extraordinary Film Subscription Boxes that will appeal to film scholars, filmmakers, film buffs, film students and anyone who loves watching, and thinking about, fine film. If you, or anyone on your holiday gift list prefers Film to Hollywood blockbusters– then these boxes are sure to be cherished gifts.

Boxwalla, it is an online bi-monthly subscription box service that was specifically created to introduce people to the finest artists, filmmakers, writers and artisans from across the globe. The creators of Boxwalla have effectively curated what they call a "multi-sensory haven for the multifaceted woman (or man) who wants to experience the best in every category." They currently offer four categories for their subscription boxes that appeal to the senses and the intellect, and each of these carefully curated boxes features the highest quality products imaginable.

...we use a bimonthly subscription model to showcase the work of the artists and artisans within these categories. Subscribers have the option of switching between categories before every cycle.

We are passionate about showcasing the most effective, practical and luxurious products we have experienced in each category. The products included in each box are meant to be used together in a slow, pampering beauty ritual, while also complementing the products featured in previous boxes.

Boxwalla Film Boxes are comprised of films that have been selected from the iconic cinematic masterpieces from The Criterion Collection.

About The Criterion Collection,

Since 1984, the Criterion Collection, a continuing series of important classic and contemporary films, has been dedicated to gathering the greatest films from around the world and publishing them in editions that offer the highest technical quality and award-winning, original supplements. Over the years, as we moved from laserdisc to DVD, Blu-ray disc, and online streaming, we’ve seen a lot of things change, but one thing has remained constant: our commitment to publishing the defining moments of cinema for a wider and wider audience. The foundation of the collection is the work of such masters of cinema as Renoir, Godard, Kurosawa, Cocteau, Fellini, Bergman, Tarkovsky, Hitchcock, Fuller, Lean, Kubrick, Lang, Sturges, Dreyer, Eisenstein, Ozu, Sirk, Buñuel, Powell and Pressburger. Each film is presented uncut, in its original aspect ratio, as its maker intended it to be seen. Every time we start work on a film, we track down the best available film elements in the world, use state-of-the-art telecine equipment and a select few colorists capable of meeting our rigorous standards, then take time during the film-to-video digital transfer to create the most pristine possible image and sound. Whenever possible, we work with directors and cinematographers to ensure that the look of our releases does justice to their intentions. Our supplements enable viewers to appreciate Criterion films in context, through audio commentaries by filmmakers and scholars, restored director’s cuts, deleted scenes, documentaries, shooting scripts, early shorts, and storyboards. To date, more than 150 filmmakers have made our library of Director Approved DVDs, Blu-ray discs, and laserdiscs the most significant archive of contemporary filmmaking available to the home viewer. 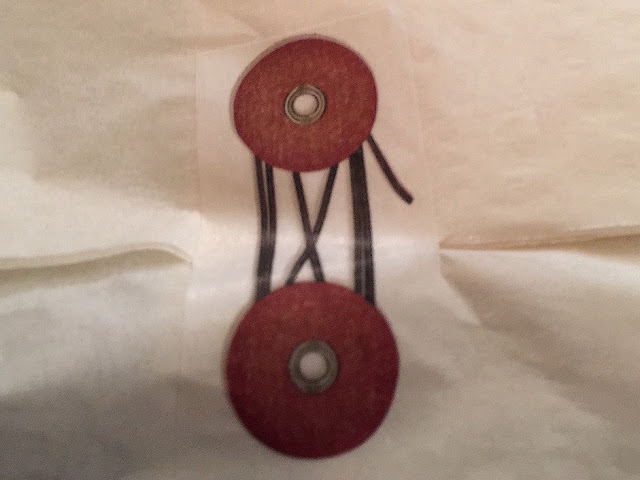 "Art Cinema is Boring". The Film Box challenges this notion by demystifying the work of the best filmmakers, by creating a context within which to view them.

Each Box will contain films from the Criterion Collection, along with inserts with detailed information on each film. There will also be an exclusive post film discussion sent to subscribers.

We will also send subscribers additional material via email, some to be read before, and some after watching the films. If you have any questions or thoughts about these films, feel free to contact Boxwalla through social media or via email.

Each Boxwalla Film box costs $49.95, and comes in a gorgeous gift box with information about each of the films features that month. Here are a few of Boxwalla's Film boxes to contemplate: 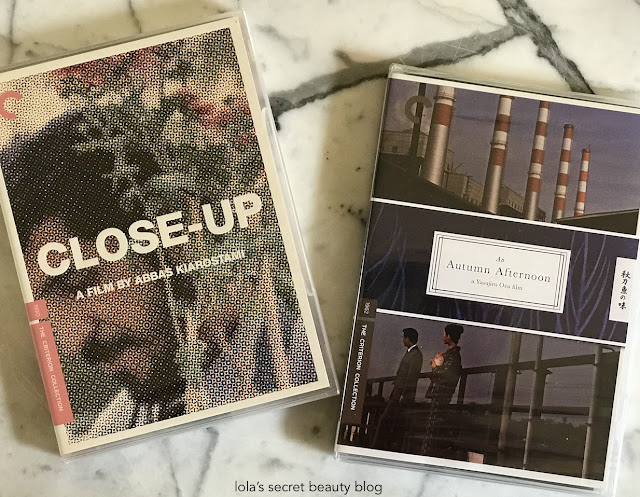 February Film Box Boxwalla ($49.95): Includes two masterful films from the Criterion Collection– Closeup by Abbas Kiarostami and An Autumn Afternoon by Yasujiro Ozu. Boxwalla asserts that the February box "features two filmmakers: one living, one dead but both extraordinary observers of the society they belong to. Their films quietly entertain while highlighting the humor and pathos of life."

About Closeup (Iran, 1990) by Abbas Kiarostami:

Internationally revered Iranian filmmaker Abbas Kiarostami has created some of the most inventive and transcendent cinema of the past thirty years, and Close-up is his most radical, brilliant work. This fiction-documentary hybrid uses a sensational real-life event—the arrest of a young man on charges that he fraudulently impersonated the well-known filmmaker Mohsen Makhmalbaf—as the basis for a stunning, multilayered investigation into movies, identity, artistic creation, and existence, in which the real people from the case play themselves. With its universal themes and fascinating narrative knots, Close-up has resonated with viewers around the world.

Disk Features:
About An Autumn Afternoon (Japan, 1962) by Yasujiro Ozu:

The last film by Yasujiro Ozu was also his final masterpiece, a gently heartbreaking story about a man’s dignifed resignation to life’s shifting currents and society’s modernization. Though the widower Shuhei (frequent Ozu leading man Chishu Ryu) has been living comfortably for years with his grown daughter, a series of events leads him to accept and encourage her marriage and departure from their home. As elegantly composed and achingly tender as any of the Japanese master’s films, An Autumn Afternoon is one of cinema’s fondest farewells. 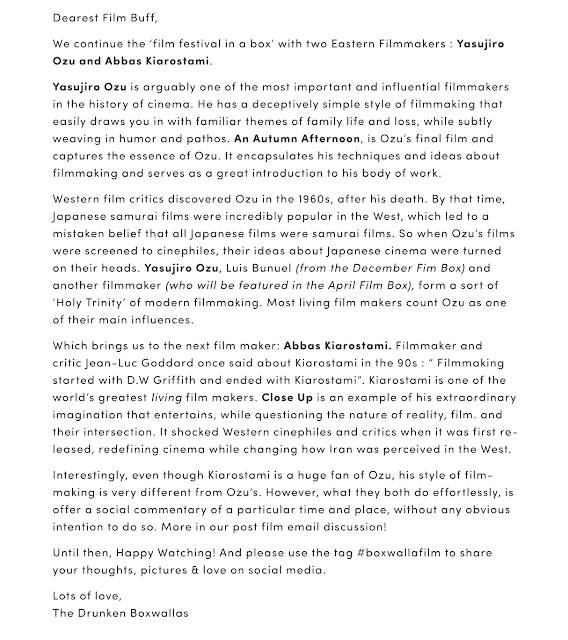 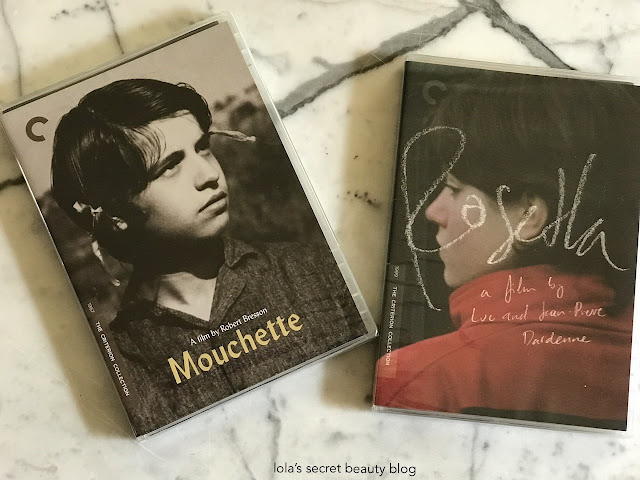 The April Box: An Exercise in Minimalism ($49.95): Boxwalla posits, "The April Film Box continues the 'Film Festival in a Box' with filmmakers from France and Belgium. The featured filmmakers are known for their minimalism, using it to question the nature of film and of humanity."

About Mouchette (France, 1967) by Robert Bresson:

Robert Bresson plumbs great reservoirs of feeling with Mouchette, one of the most searing portraits of human desperation ever put on film. Faced with a dying mother, an absent, alcoholic father, and a baby brother in need of care, the teenage Mouchette seeks solace in nature and daily routine, a respite from her economic and pubescent turmoil. An essential work of French filmmaking, Bresson’s hugely empathetic drama elevates its trapped protagonist into one of the cinema’s great tragic figures.

Disk Features:
About Rosetta (Belgium, 1999) by Luc and Jean-Pierre Dardienne:

The Belgian filmmaking team of brothers Luc and Jean-Pierre Dardenne turned heads with Rosetta, an intense vérité drama that closely follows a poor young woman struggling to hold on to a job to support herself and her alcoholic mother. It’s a swift and simple tale made revelatory by the raw, empathetic way in which the directors render Rosetta’s desperation, keeping the camera nearly perched on her shoulder throughout. Many have copied the Dardennes’ style, but few have equaled it. This ferocious film won big at Cannes, earning the Palme d’Or for the filmmakers and the best actress prize for the indomitable Émilie Dequenne. 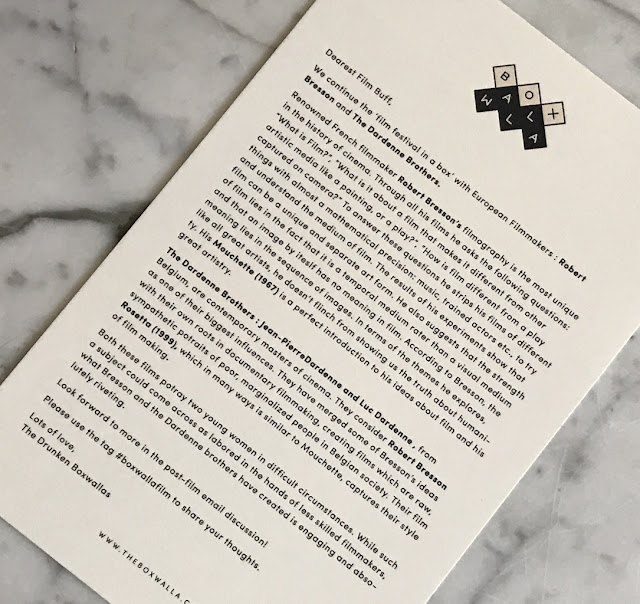 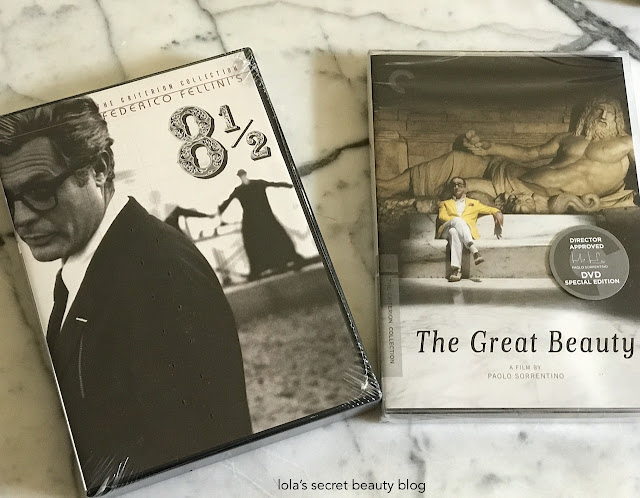 The June Box: Roma ($49.95): The June Box contained two iconic Italian films from the Criterion Collection. Boxwalla selected these two cinematic masterpieces in order to explore "the many distinct voices throughout the history of Italian Cinema."

Marcello Mastroianni plays Guido Anselmi, a director whose new project is collapsing around him, along with his life. One of the greatest films about film ever made, Federico Fellini’s 8½ (Otto e mezzo) turns one man’s artistic crisis into a grand epic of the cinema. An early working title for 8½ was The Beautiful Confusion, and Fellini’s masterpiece is exactly that: a shimmering dream, a circus, and a magic act.

Disk Features:
About The Great Beauty (Italy, 2013) by Paolo Sorrentino:

For decades, journalist Jep Gambardella has charmed and seduced his way through the glittering nightlife of Rome. Since the legendary success of his only novel, he has been a permanent fixture in the city’s literary and elite social circles. But on his sixty-fifth birthday, Jep unexpectedly finds himself taking stock of his life, turning his cutting wit on himself and his contemporaries, and looking past the lavish nightclubs, parties, and cafés to find Rome itself, in all its monumental glory: a timeless landscape of absurd, exquisite beauty. Featuring sensuous cinematography, a lush score, and an award-winning central performance by the great Toni Servillo, this transporting experience by the brilliant Italian director Paolo Sorrentino is a breathtaking Felliniesque tale of decadence and lost love. 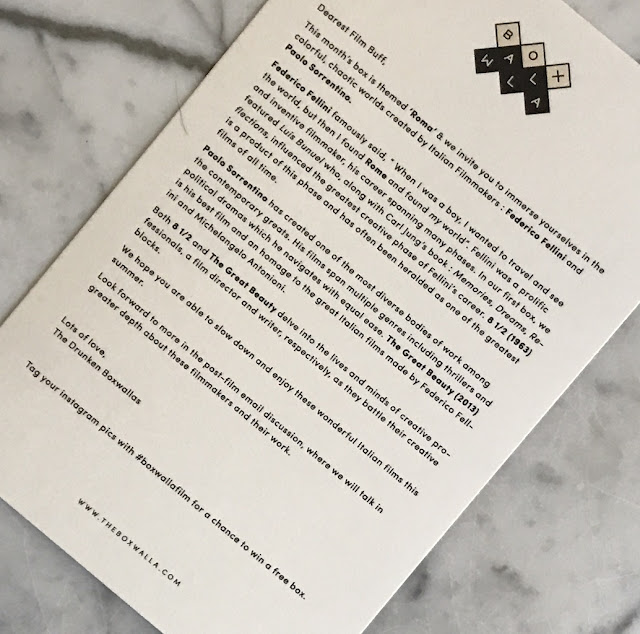 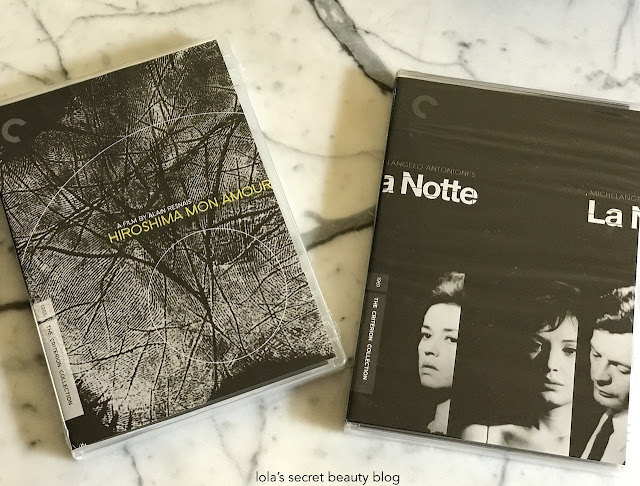 The August Box: The Modernists ($49.95): The August Film Box featured 'The Modernists': "Italian Filmmaker Michelangelo Antonioni & French Filmmaker Alan Resnais. Both of these filmmakers moved away from realism towards a language of cinema that allowed for a deeper exploration of the intricacies and idiosyncrasies of the human mind."

A cornerstone of the French New Wave, the first feature from Alain Resnais is one of the most influential films of all time. A French actress (Emmanuelle Riva) and a Japanese architect (Eiji Okada) engage in a brief, intense affair in postwar Hiroshima, their consuming mutual fascination impelling them to exorcise their own scarred memories of love and suffering. With an innovative flashback structure and an Academy Award–nominated screenplay by novelist Marguerite Duras, Hiroshima mon amour is a moody masterwork that delicately weaves past and present, personal pain and public anguish.

This psychologically acute, visually striking modernist work was director Michelangelo Antonioni’s follow-up to the epochal L’avventura. Marcello Mastroianni and Jeanne Moreau star as a novelist and his frustrated wife, who, over the course of one night, confront their alienation from each other and the achingly empty bourgeois Milan circles in which they travel. Antonioni’s muse Monica Vitti smolders as an industrialist’s tempting daughter. Moodily sensual cinematography and subtly expressive performances make La notte an indelible illustration of romantic and social deterioration. 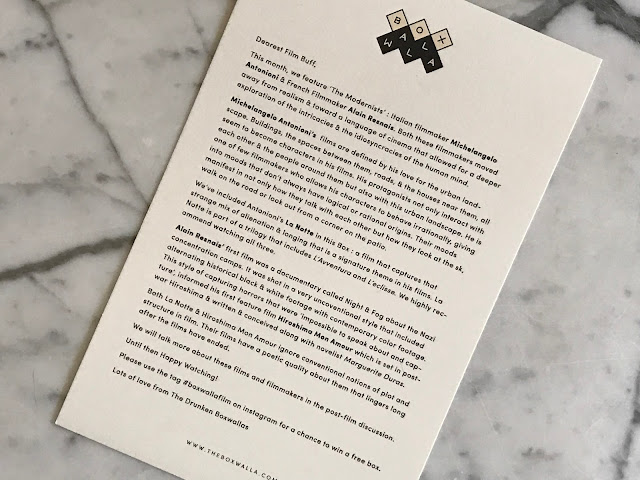 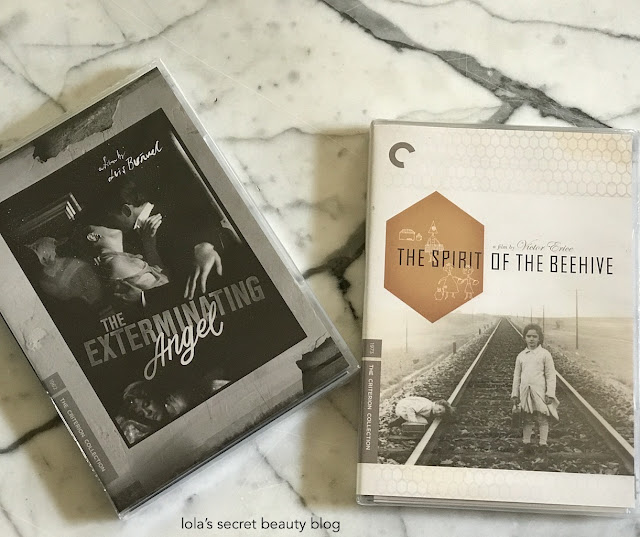 About The Exterminating Angel (Mexico, 1962) by Luis Buñuel:

A group of high-society friends are invited to a mansion for dinner and find themselves inexplicably unable to leave, in Luis Buñuel’s daring masterpiece The Exterminating Angel (El ángel exterminador). Made just one year after the director’s inter­na­tional sensation Viridiana, this film, full of eerie comic absurdity, continues Buñuel’s wicked takedown of the rituals and dependencies of the frivolous upper classes.

Disk Features:
About The Spirit of The Beehive (Spain, 1973) by Victor Erice:

Criterion is proud to present Víctor Erice’s spellbinding The Spirit of the Beehive (El espíritu de la colmena), widely regarded as the greatest Spanish film of the 1970s. In a small Castilian village in 1940, in the wake of the country’s devastating civil war, six-year-old Ana attends a traveling movie show of Frankenstein and becomes possessed by the memory of it. Produced as Franco’s long regime was nearing its end, The Spirit of the Beehive is a bewitching portrait of a child’s haunted inner life and one of the most visually arresting movies ever made. 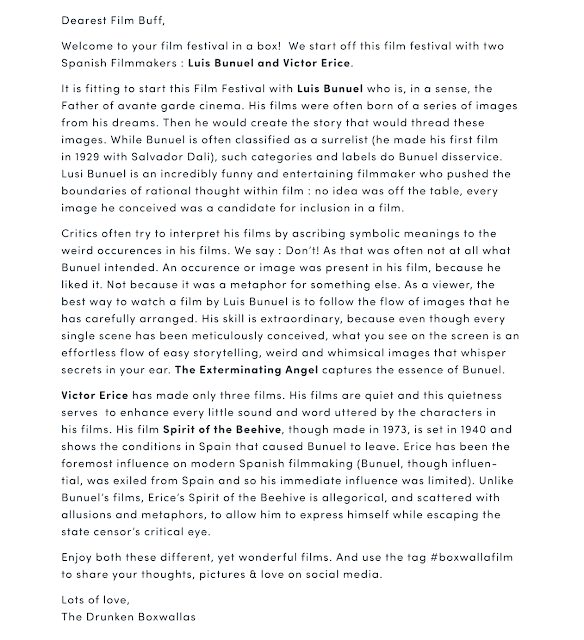 Overall Assessment: This is probably the best gift that you could ever give someone with a penchant for Film, and the recipient is sure to be thrilled by all of these masterpieces from The Criterion Collection. Boxwalla offers the ultimate, high quality and beautiful edited subscription boxes, and once you experience their magnificence you will be a true believer! A+

$49.95 for each Film Box from Boxwalla (Affiliate Links).

Press Sample, All views expressed are categorically my own.
Copyright © 2016 www.lolassecretbeautyblog.com All Rights Reserved.
Posted by lola seicento at 10:14 AM