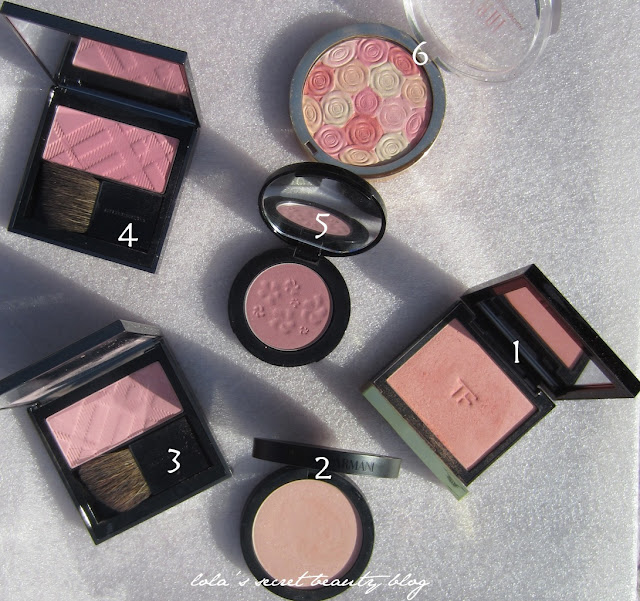 All purchased by me
After reading my post entitled, "Tom Ford Beauty Cheek Color in Frantic Pink & Giorgio Armani Sheer Blush No. 2 Pink Side by Side- Swatches," Naomi asked me to expand the field a touch and include a few other blushes for comparison. She specifically wanted to see how Armani No. 2 compared to Burberry Misty, Burberry Peony, and Rouge Bunny Rouge Gracilis. Then Gummy wondered how the Armani & Ford blushes compared to her most coveted Burberry blushes. Therefore, I decided to oblige my two friends and engage in a veritable swatchfest for them. I decided to include Tom Ford Frantic Pink and a budget friendly drugstore blush by choosing Milani Beauty's Choice. Be aware that I limited the scope considerably since I have far more pink blushes than what you see here. 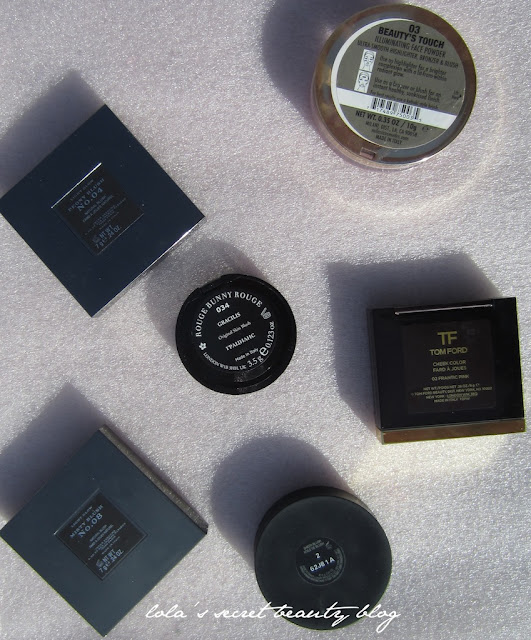 While Burberry Misty, Burberry Peony, Rouge Bunny Rouge Gracilis, and Milani Beauty's Touch are decidedly blue-based cool leaning pinks- the same can hardly be said for Tom Ford Frantic Pink and Giorgio Armani Sheer Blush No. 2 Pink. Instead, they appear to be warmer- at least comparatively speaking. While Armani No. 2 is quite light it remains more neutral than Frantic Pink-which is warmer and richer in hue. If you have a penchant for cool blue-based pinks, neither Frantic Pink nor Armani No. 2 will really comport to your taste, while the remaining 4 shades most assuredly will.

I would say that the smooth buttery soft and finely milled texture of the Armani blush is consistent with that of the coveted Burberry formula. In fact, all of the blushes are soft and silky- but I would characterize the Armani and Burberry blushes as more so than the others. Milani Beauty's Touch is surprisingly finely milled and silky smooth for a drugstore brand, and quite frankly does an astounding job keeping up with these luxury blushes.

I am a blush fiend, and I am dazzled by all six of these beauties. I do wish that Tom Ford and Giorgio Armani would expand their color selections as the former has far too many warm toned shades for my cool skin-tone (notwithstanding Wicked- which beckons me) , and the latter has too many muted muddy colors that really don't do a thing for my complexion. That said, the Armani blush is a real treat to use, and you can rest assured that any blue-based pinks that make it into their upcoming collections (permanent or limited edition) will make it into my coveted stash!
Posted by lola seicento at 8:52 AM