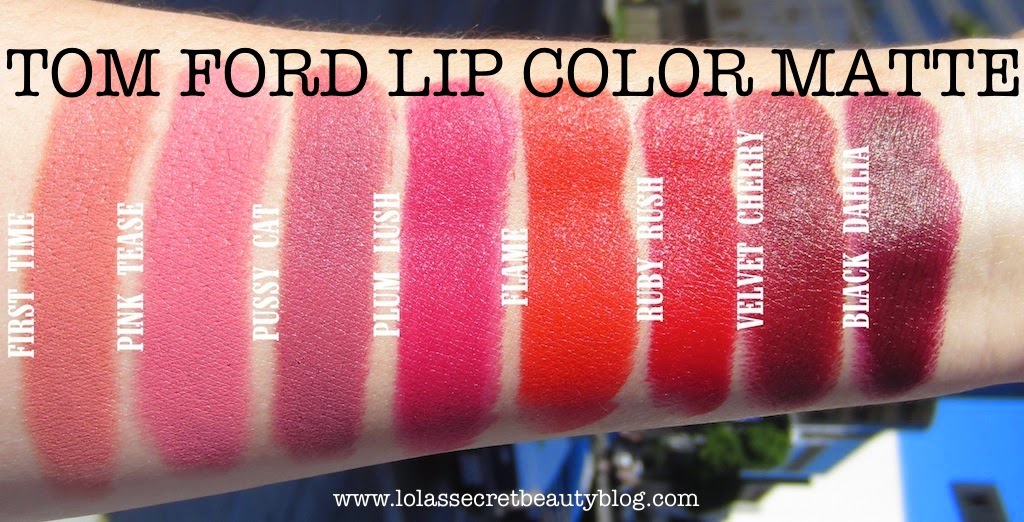 Yesterday I spend some time playing at the Tom Ford counter at Neiman Marcus in Beverly Hills with my friend, and counter manager, Michelle Weinstein. As we were discussing all of the beautiful new Lip Color Mattes we started to ponder the similarities between some of the shades from the new matte line with the core Lip Color line, and as it turns out four out of the eight new matte shades have close counterparts in the core line. The closeness in hue, however, is where the similarities end since the mattes have a decidedly more velvet matte finish. 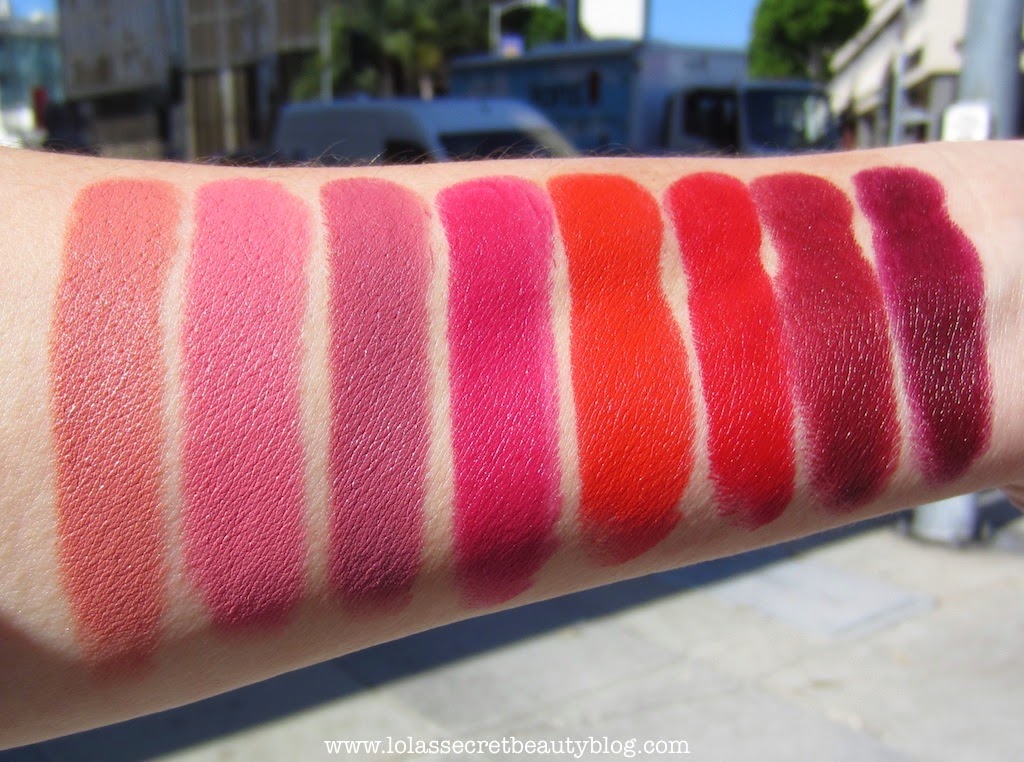 If you have an aversion to matte lipsticks there is an alternative for you, but let it be said, and this point cannot be sufficiently underscored, that Tom Ford Lip Color Matte lipsticks are an altogether new species of matte lipsticks. These are not the moisture depleting mattes of yesterday that will leave your lips war-torn. You will still want to prep your lips, and if your lips are naturally prone to being dry-- then you will likely want a nice moisturizing base. 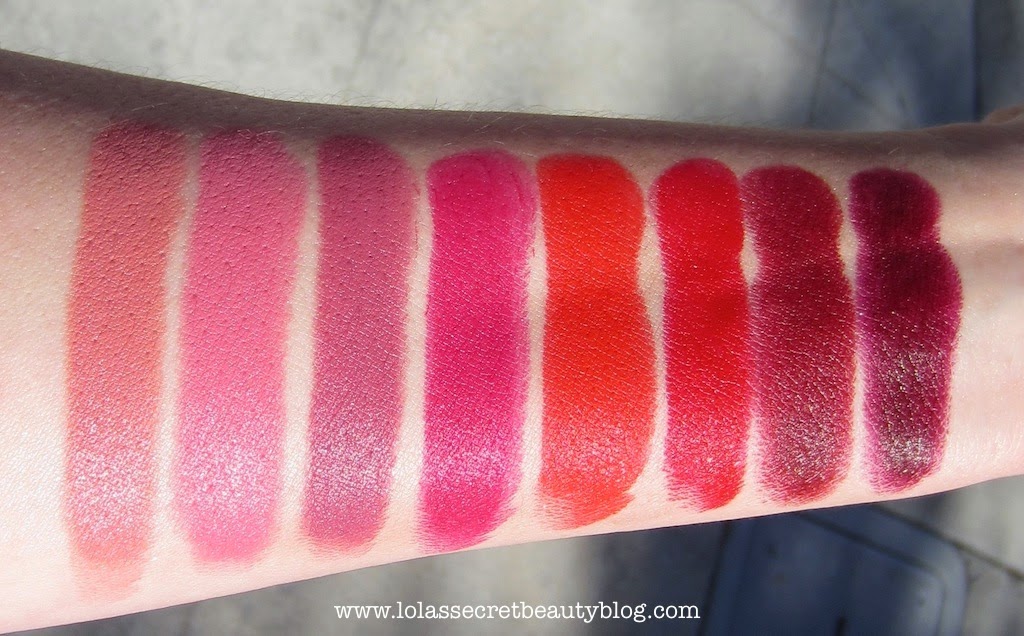 You will note from these swatches that Tom Ford's permutation of a matte lipstick definitely has some sheen, but make no mistake about it these refined sparkling gems are very long-wearing and richly pigmented. An in-depth review of my collection of mattes is forthcoming. 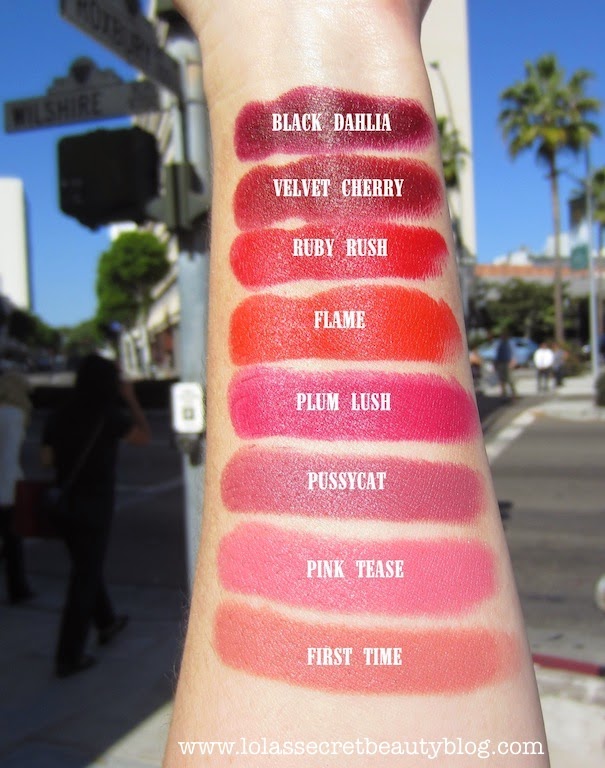 It was such a stunningly beautiful day in Beverly Hills, and the light was so perfect, that I took lots of pictures in an effort to give you a very realistic view of both the colors and finishes of these shockingly gorgeous lipsticks. 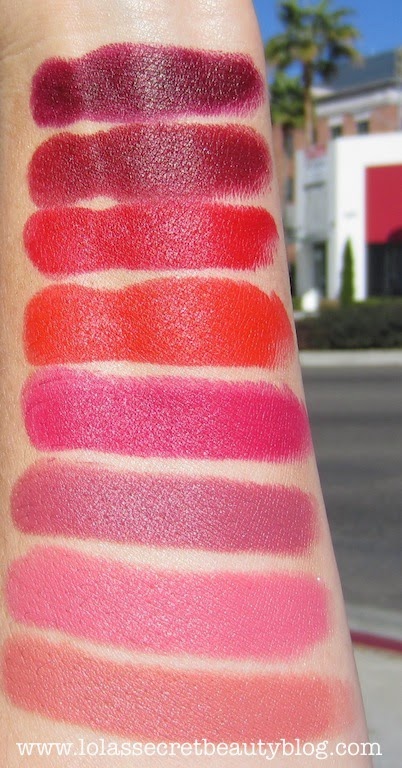 The richness of these colors translates to serious opacity in a single swipe. 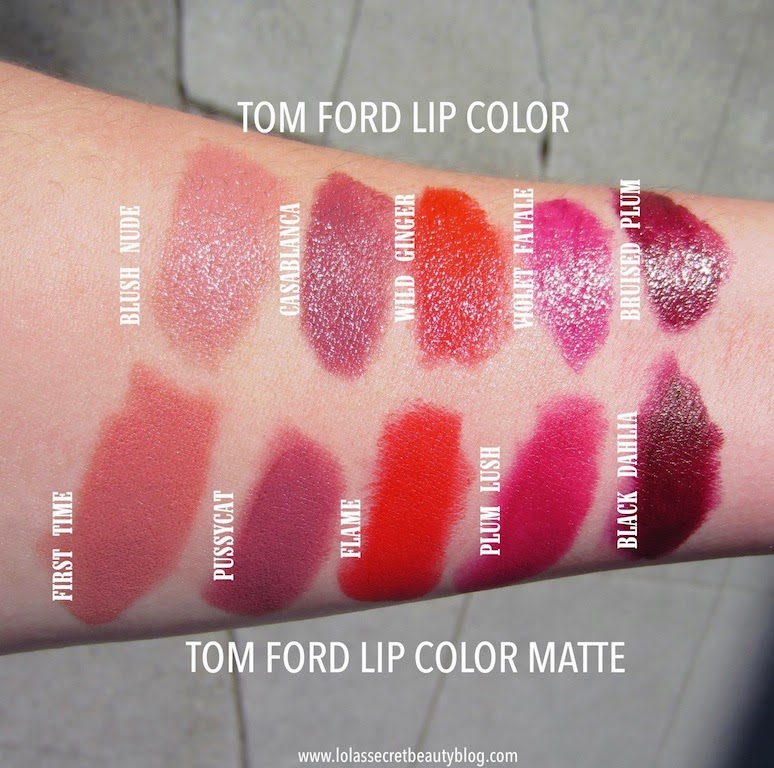 First Time (Limited Edition) is close in hue to Blush Nude or perhaps closer yet if Blush Nude and Spanish Pink had a baby. Of the four shades First Time differs the most from the suggested dupes from the core Lip Color Line.

Pussycat has a touch more purple than Casablanca, but they are quite comparable in hue.

Flame is a touch more orange than Wild Ginger, but they are very closely related shades.

Plum Lush is a touch less purple than Violet Fatale, but they are closely enough related that your selection should be based less upon hue, and more upon the desired finish.

Black Dahlia (Limited Edition) and Bruised Plum are very close, but there is a certain intensity in the blackened base that one finds in Black Dahlia that does not exist in Bruised Plum.

For vampy lip enthusiasts who have a nearly irrational penchant for Tom Ford lipsticks, then you will appreciate seeing Tom Ford Black Orchid (a mythical beauty) juxtaposed to Black Dahlia and Bruised Plum. These are three of the most sublime vampy shades ever created. 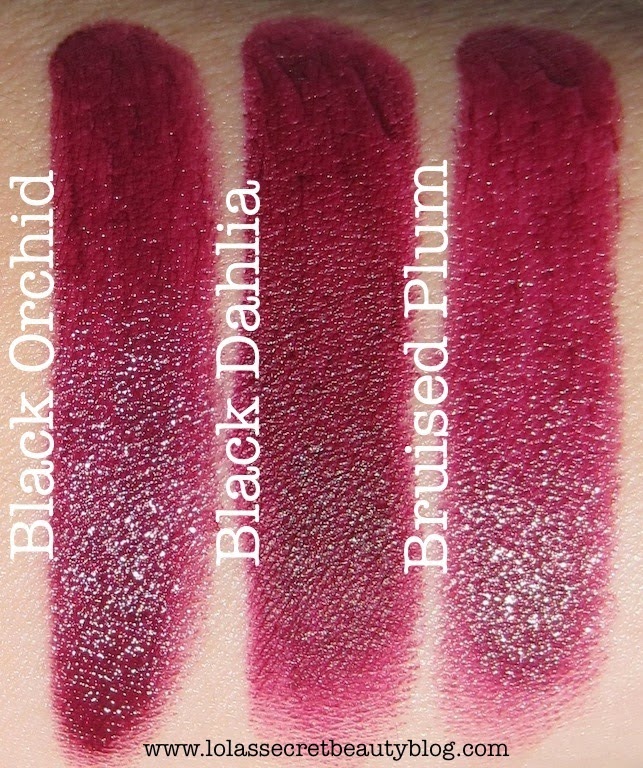 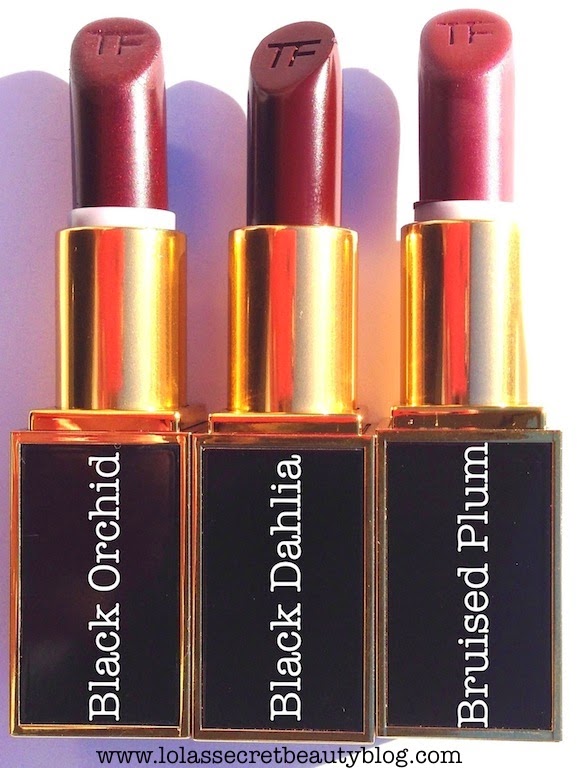 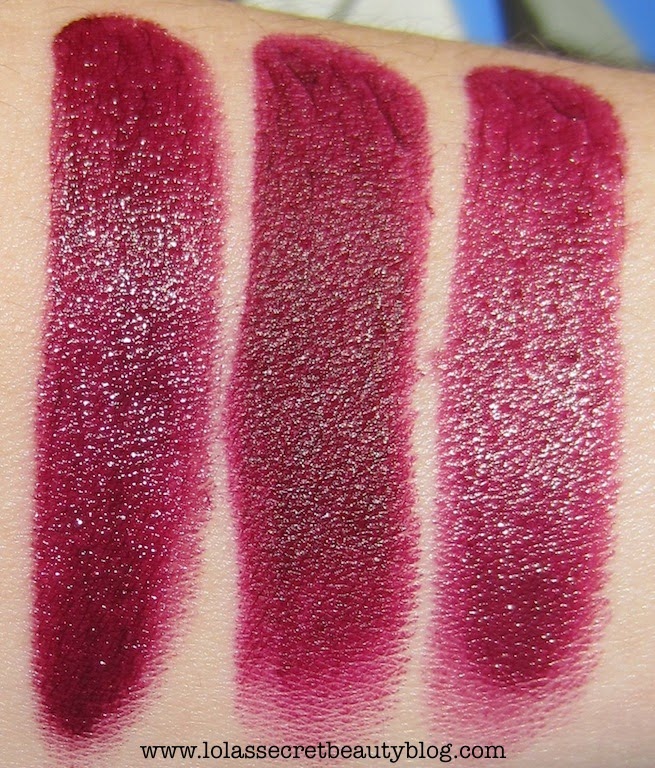 As you can see Black Dahlia is essentially a more matte version of Black Orchid, and Bruised Plum is a slightly less intense version of both. If you continue to mourn having missed out on Black Orchid, then I think that you will likely be more satisfied with Black Dahlia than with Bruised Plum. Additionally, if vampy is where your lipstick passions reside, then get Black Dahlia before it is gone since it is one of the two Limited Edition Lip Color Mattes (First Time is the other). 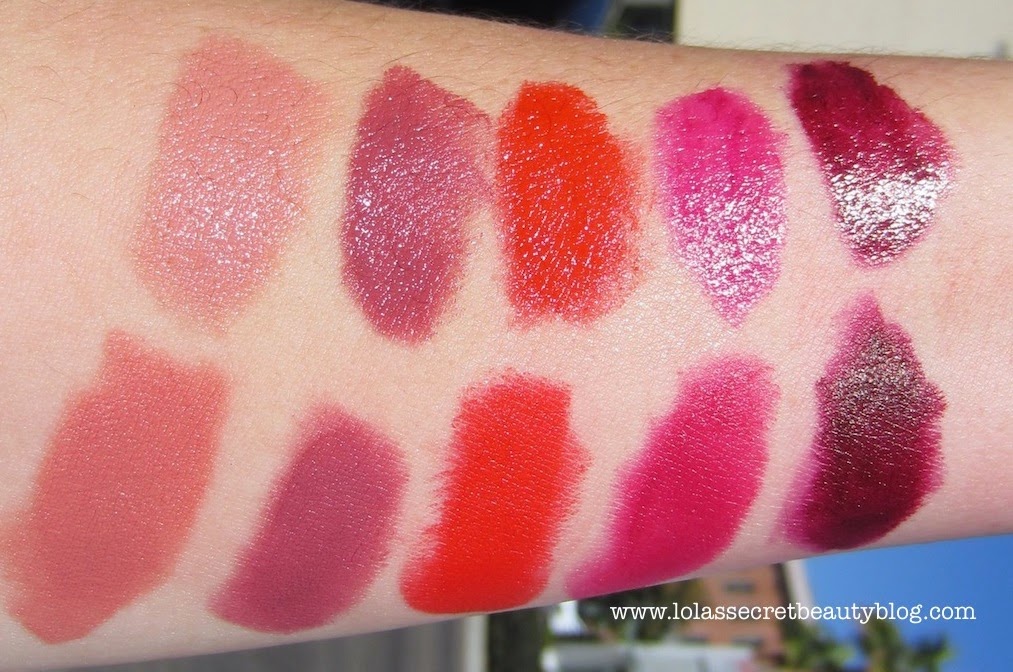 You will note that the mattes do possess a lovely sheen, though decidedly less shimmering than the Lip Color formula. 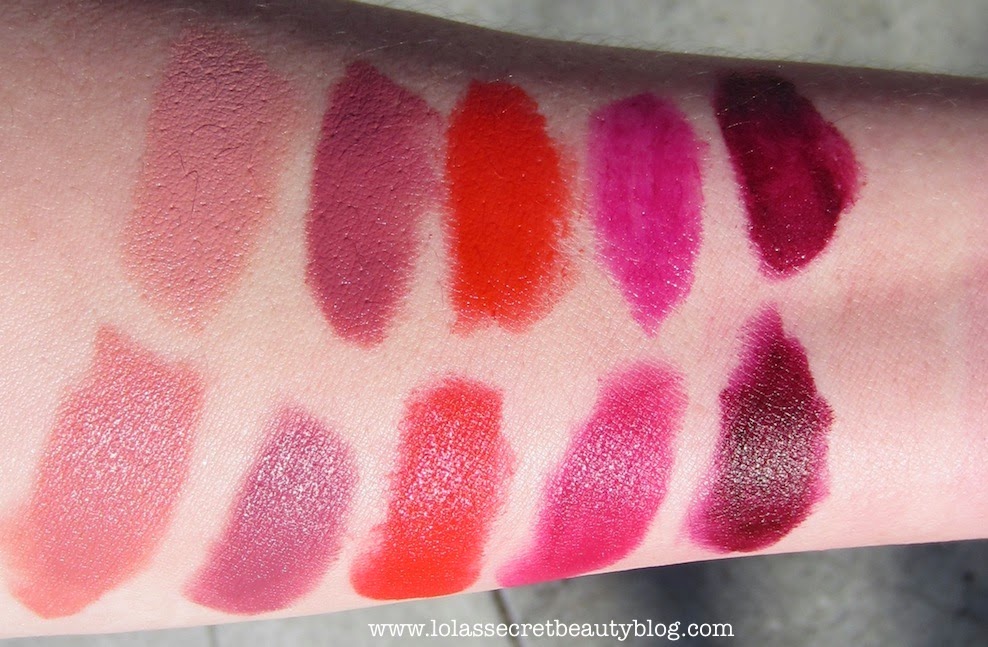 Modulating the exposure to the sum reveals the base colors more readily, as can be seen in the swatches below. 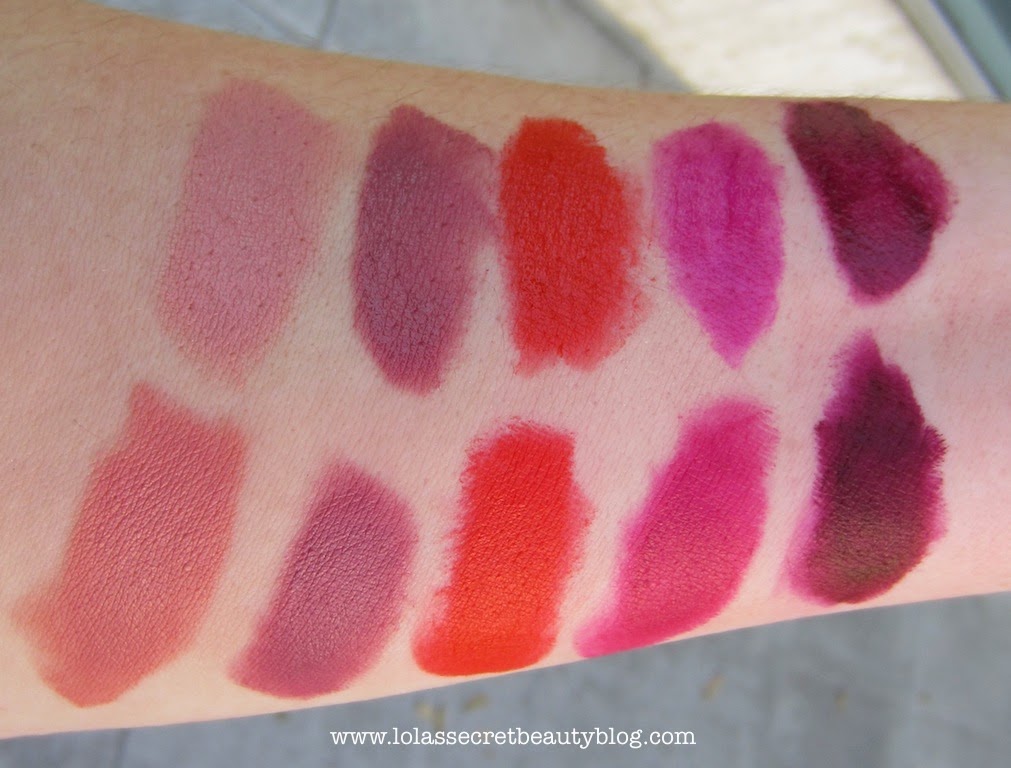 You really can't go wrong with either formula, and it will likely come down to a preference in the finish. That said, if chronically dry lips plague you, you will likely find solace in the core Lip Color line. 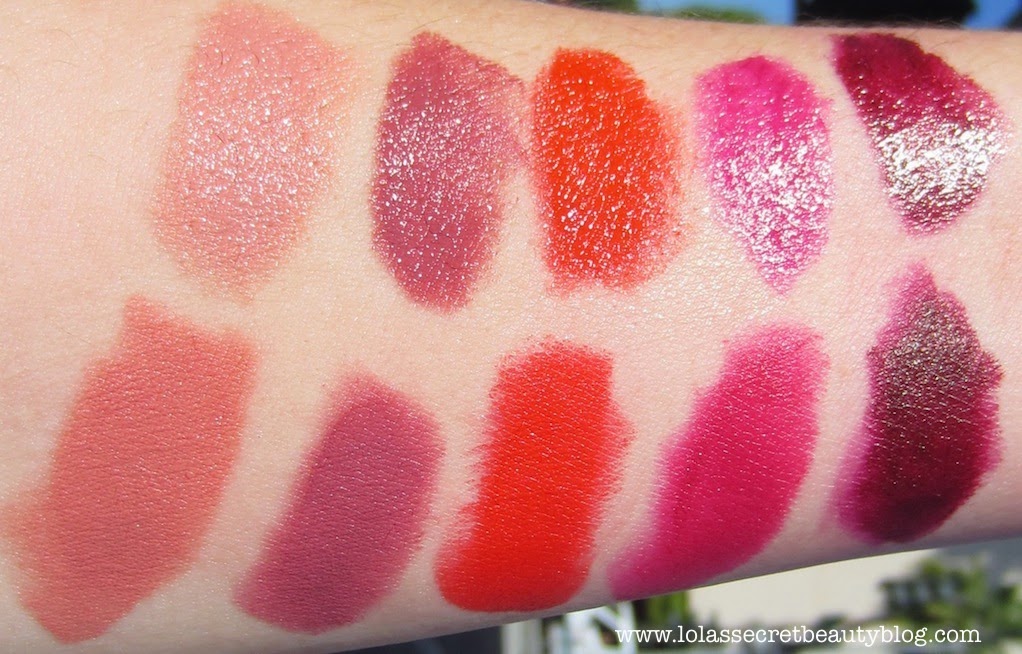 UPDATE: wefadetogray wanted to know if Ruby Rush is a blue-based red, and it is. but it is visually modified when swatched next to Flame (a decidedly bright orange). Ruby Rush is a cool red with pink undertones as you can see from the swatch below.

J asked which shades I have from the Lip Color Matte collection- so here is a sneak-peek! 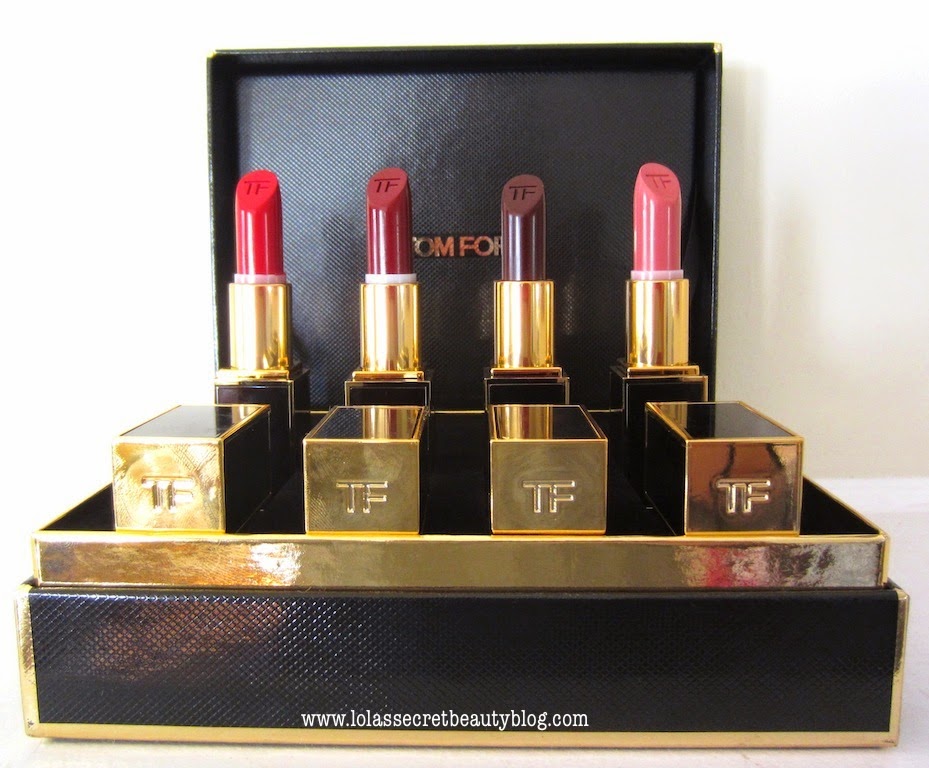 I hope that this makes your choices easier! Are you tempted by any of the shades? Do you have a preference in finish? Have you purchased any of these beauties yet? Which ones are calling your name?

Feel free to call Michelle Weinstein at Neiman Marcus in Beverly Hills and she can ship them to you
(310) 550-5900 x2517. If you prefer to shop online click here.