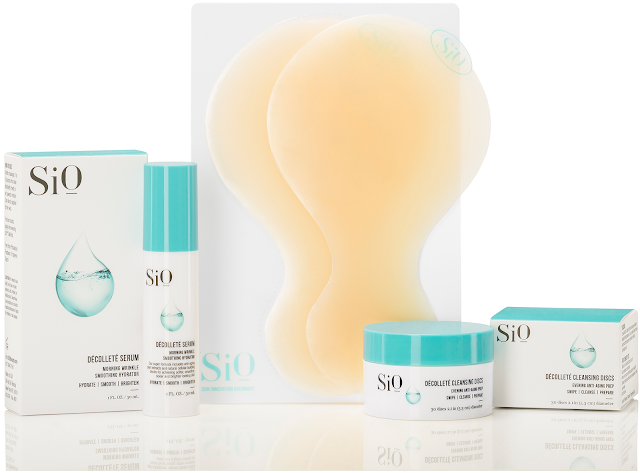 If you are among the many who spent years lounging in the sun, or even just sleeping on your side, there is no question that you will awaken one morning to find unsightly wrinkles, lines and/or discoloration on your décolleté. It is an entirely unpleasant consequence of the aforementioned behaviors, and among the most notable ways to manifest these visible signs of prematurely aged skin of the décolleté. Additionally, like the hands, the décolleté is one of the most neglected areas of the body when it comes to application and reapplication of sunscreen. Therefore, unless you remain committed to protecting this area, you can expect to see unwanted damage. Of course, part of the natural aging process involves skin becoming looser and more lined as collagen production slows down, but there are many environmental assaults from which we can protect our skin. Of course avoiding excessive sun exposure, and using an effective high SPF sunscreen is a good start, but if you are a side-sleeper you will also eventually see crepey skin and creases.

While I do not sleep exclusively on my side, nor do I sunbathe– I have sustained some cumulative sun damage on my décolleté. It's not atrocious, but there is some hyperpigmentation and a few very faint lines from sleeping on my side part of each night. Until recently, I was unaware of any skincare products or systems that were created products to specifically address these issues, but I am very pleased to say that Sio Beauty has created three products that form a wonderful system to deal with this skin issue.

The result of tireless research and refinement, SiO’s transformative capabilities stem from the science of its intrinsic medical technology. Even the name is a reflection of the organic components at work: Silicon and Oxygen. Together, these elements create the compound utilized by medical experts for over 30 years to reduce and prevent scarring and skin imperfections.

Founder and renowned personal care expert, Gigi Howard, first encountered the healing power of medical-grade silicone through a friend and quickly realized it had untapped potential to help with a problem she had been experiencing. Gigi used the strip to reduce wrinkles that were becoming more and more prominent in her décolleté every morning. In just one night of use, she noticed a dramatic difference.

As a result, she created the proprietary SiO three-part system, consisting of our patent pending SkinPad, Morning Serum and Evening Cleansing Discs. The SiO system not only provides 24 hours of smoothing and hydrating effects, but over time can also help prevent future wrinkles from forming. 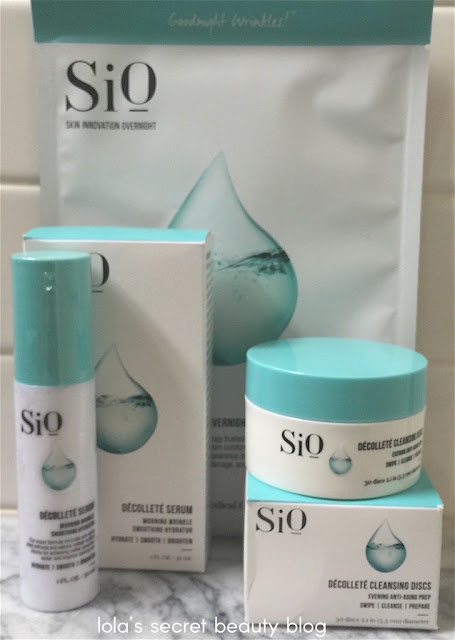 The SiO SkinPad is designed to provide an ideal microclimate of hydration that allows your décolleté skin to normalize. Not only is it a non-invasive 100% effective solution for eliminating wrinkles, it’s also custom tapered to hug the body as closely and comfortably as possible while you sleep.

While the ultra-trim design may make you forget it’s there, you won’t be able to ignore results of restoring and maintaining a smooth, youthful décolleté. 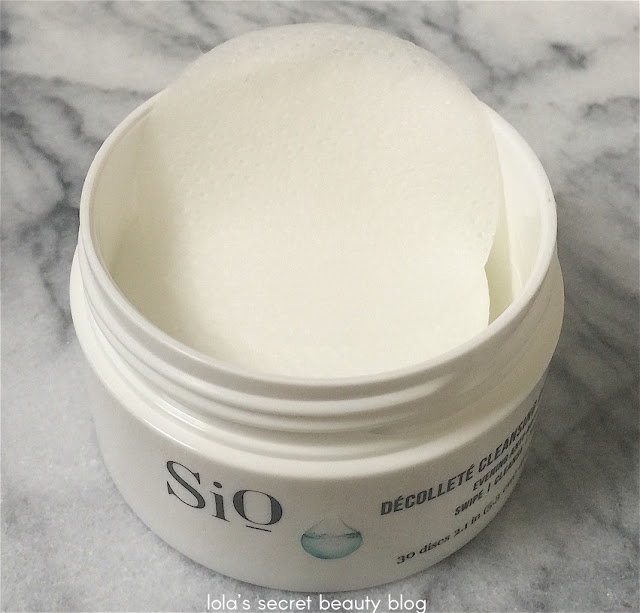 STEP 1: SiO Décolleté Cleansing Disks ($45.00 for 30 disks from SiO Beauty): The first step couldn't be any easier, you simply use the SiO Décolleté Cleansing Disks to clean skin and exfoliate dead skin cells by wiping the décolleté and cleavage area in a circular motion with the pad. The pads have enough texture that you really don't need to use additional pressure to get good results. I use a light hand, and am constantly impressed by the extent to which it cleans and exfoliates he skin without any irritation or discomfort.

To maximize the wrinkle-smoothing effects of the three-step SiO regimen, our Décolleté Cleansing Discs are highly recommended for use prior to the application of the SiO SkinPad.

By lightly exfoliating and clearing pores, you are preparing the décolleté for the SkinPad to achieve its best possible reparative effects. And by cleansing and drying the skin correctly, putting the SkinPad itself on the body will be easier and more comfortable.

It’s not magic, it’s science. SiO’s Décolleté Cleansing discs use a gentle yet effective combination of glycolic and lactic acids to encourage exfoliation and remove old skin cells. Cleansing will reveal a healthy, glowing skin and get the skin prepped to smooth and repair itself when wearing the SkinPad. The zero-alcohol formula is extra gentle on skin and is safe for sun-damaged skin. 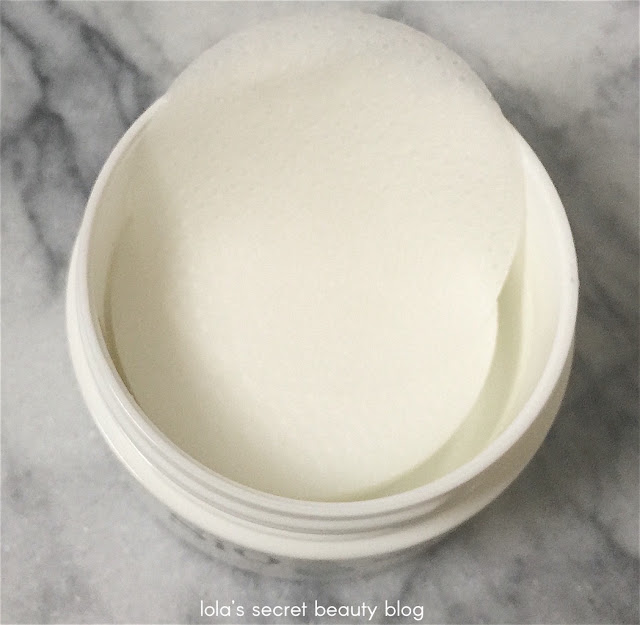 Caution: For external use only. Do not use on broken skin, open wounds, cuts, irritated or infected skin. Discontinue use and consult your doctor if signs of irritation, or a rash appears.

I would also suggest not use this if you have suspicious moles or growths because if they are cancerous or precancerous you do not want to be treating them with exfoliants. When in doubt, see your doctor.

STEP 2: SiO SkinPad ($99.95 for 2 Reusable Skinpads from Sio Beauty): Carefully separate the two SiO SkinPads, and then gently remove the protective plastic film from the one that you will be using. Place the adhesive side on your skin with the large circle covering your décolleté, and it should ideally be worn while you sleep. It has a snug fit, adheres beautifully to clean, dry skin, and stays put all night long.

While Sio SkinPad is made from medical grade silicone, there are people who are allergic to silicone, and if you are among them you should definitely avoid using the Sio SkinPad altogether.

The SiO SkinPad is our patent-pending “secret” to anti-wrinkle success. The secret is that we use the same science that was previously recommended by doctors and surgeons for the purpose of healing scars and burns.

The SkinPad is custom designed to be worn on the chest décolletage and fits women of all ages and body types. It is worn overnight, during which time it restores the natural, youthful beauty of the décolleté, while also acting to prevent future wrinkles from forming. Each SkinPads lasts for 15 uses, and can be rinsed under water or washed with a mild soap to revitalize the adhesive anytime.

All SiO products are clinically tested, allergy tested and manufactured using the highest quality and safety standards. The SkinPad is made of pure medical-grade silicone and features an ultra-thin coating of adhesive, which allows the SiO SkinPad stay on the body. The adhesive is cleared by the FDA for usage in medical devices and has been rigorously tested to deliver the highest level of safety, performance and comfort.

Features:
Ingredients: The SiO SkinPad is made from silicone (Si) and oxygen (O). Silicone in its most basic form is composed one one atom of oxygen and two atoms of silicon. These form polymers, which are then linked together to maximize the permeability of the material. By creating the ideal material oxygen is allowed to pass through, while moisture is locked in creating the ultimate wrinkle-smoothing climate. 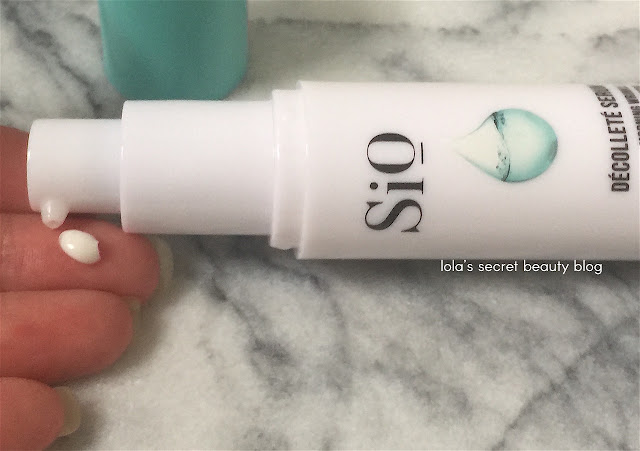 Step 3: SiO Décolleté Serum ($135.00 for 1 oz. from SiO Beauty): This serum was designed to be used in the morning after you remove the SiO SkinPad. Even if you skip using the SkinPad, SiO recommends that you use this serum consistently in order to smooth wrinkles and to deeply hydrate and brighten the skin– which have cumulative effects over time.

The SiO Décolleté Serum is an innovative Morning Wrinkle Smoothing Concentrate designed to rejuvenate and protect the décolleté. It is recommended for use after wearing the SiO SkinPad overnight but works effectively on its own as well.

Designed to be used in the morning after removing the SiO SkinPad. If you skip a night wearing the SkinPad, we recommend that you continue to use the Serum consistently as the wrinkle smoothing, hydrating and brightening effects are cumulative and maximized over time. 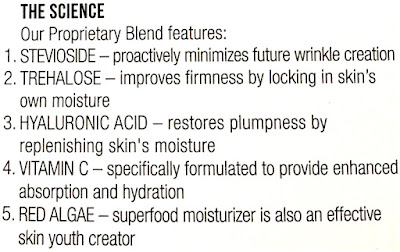 My Observations: There is no question that this is a very effective system for treating wrinkles, lines and hyperpigmentation of the décolleté. I noticed that each of the three products are quite effective when used alone, but when used together the results are far more pronounced. This system deeply hydrates the skin, plumps and nourishes fine lines, and softens the appearance of crepey skin. My skin is soft, supple, smooth and ultra-hydrated. Furthermore, my fine lines have diminished considerably after having used the system for about a month. I have noticed some fading in the light hyperpigmentation, but I need to use this system for more than a month before I can determine the extent to which it treats my sun spots.

Overall Assessment: This is a very effective system for treating the décolleté, and its ability to smooth and soften lines is quite remarkable. I use the Sio SkinPad and Cleansing Disks as needed, but I use the Décolleté Serum every single day. This is definitely a system worth your consideration if you sleep on your side, have sun damage that has caused premature lines and wrinkles, or hyperpigmentation/sun spots. I am very impressed! A+

Press Sample. All views expressed are categorically my own (Unaffiliated Links).
Copyright © 2016 www.lolassecretbeautyblog.com All Rights Reserved.
Posted by lola seicento at 8:57 AM