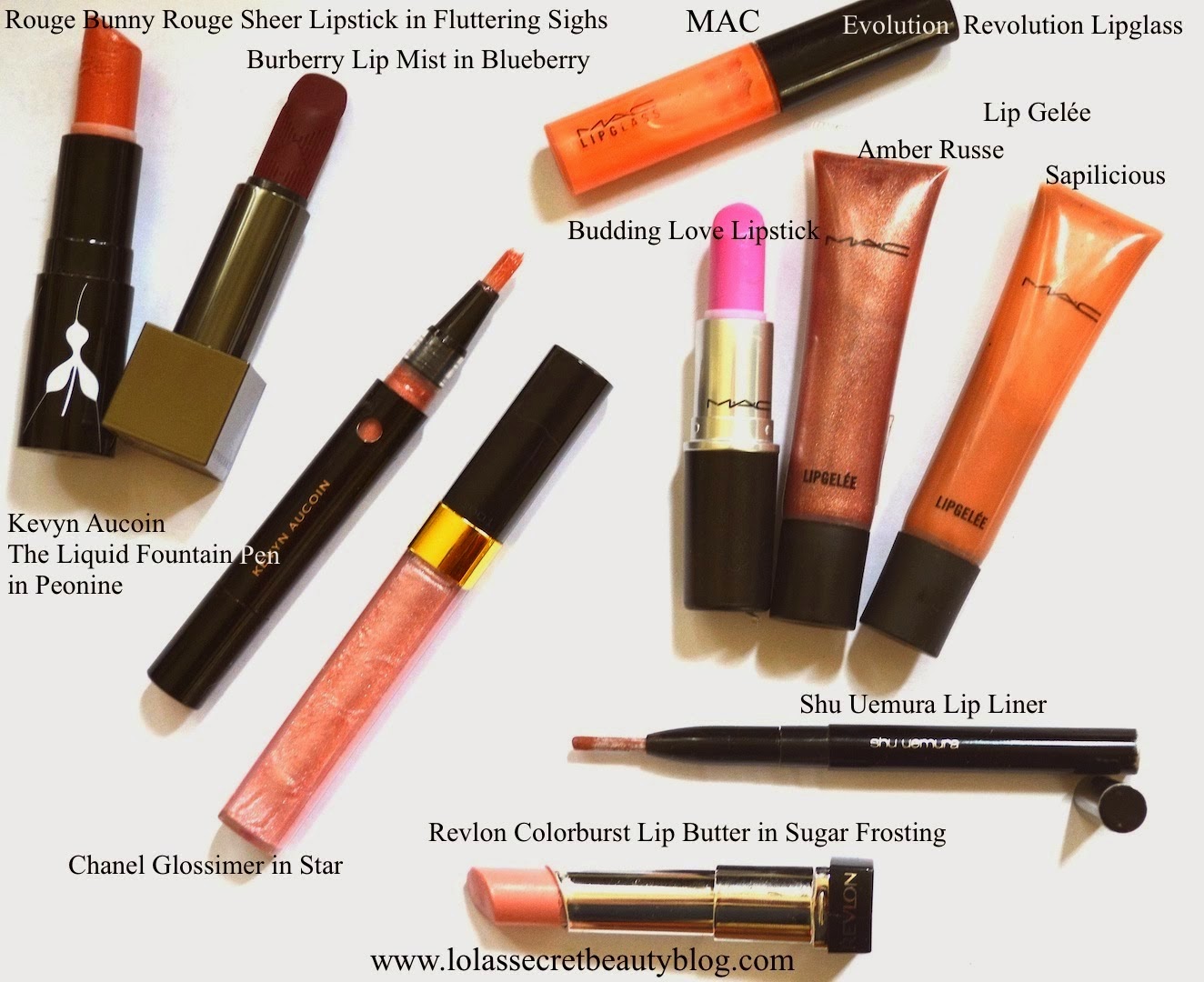 I launched Project Make-A-Dent in October 2013 in an effort to use and finish some of my neglected makeup, and there is plenty of it! Here is what I had to say then:

In the midst of all of the current gifts with purchases, and our inherent desire to purchase even more makeup- I feel myself growing somewhat anxious given the sheer size of my stash, and my continued desire to consume more. This takes on a different level of urgency as the holiday collections are beginning to appear at counters, and the lust list continues to grow (worse still when they are limited edition).

In fact, I have been thinking about this a great deal lately, and decided that while not an ultimate solution to consumerism, that I needed to make a concerted effort to use some of the things that I have. Then it came to me in the middle of the night- rather than putting myself on a "no buy"- which to me is like a diet where you can never eat anything yummy again- that I would choose my purchases far more carefully and selectively, and create a new post series whereby I select several products to use with some regularity. The end goal is to use them up completely, but not at the exclusion of using other things. These items will be kept together in a place that is easily seen and accessed in order to encourage their use. Then at some point-- perhaps on a monthly basis-- another picture will be taken to reveal how much has been used.

A year later, and with a few Project-Make-A-Dents under my belt, I can say that while I feel the same that I have become a smarter consumer. By this I mean to say that I seldom make impulse purchases, and I think long and hard about the makeup that I already have before I purchase more. That said, I am not impervious to the charms of certain products (read: Tom Ford) so while I am a little wiser in my purchases I would hardly say that I abstain from buying what I really want. 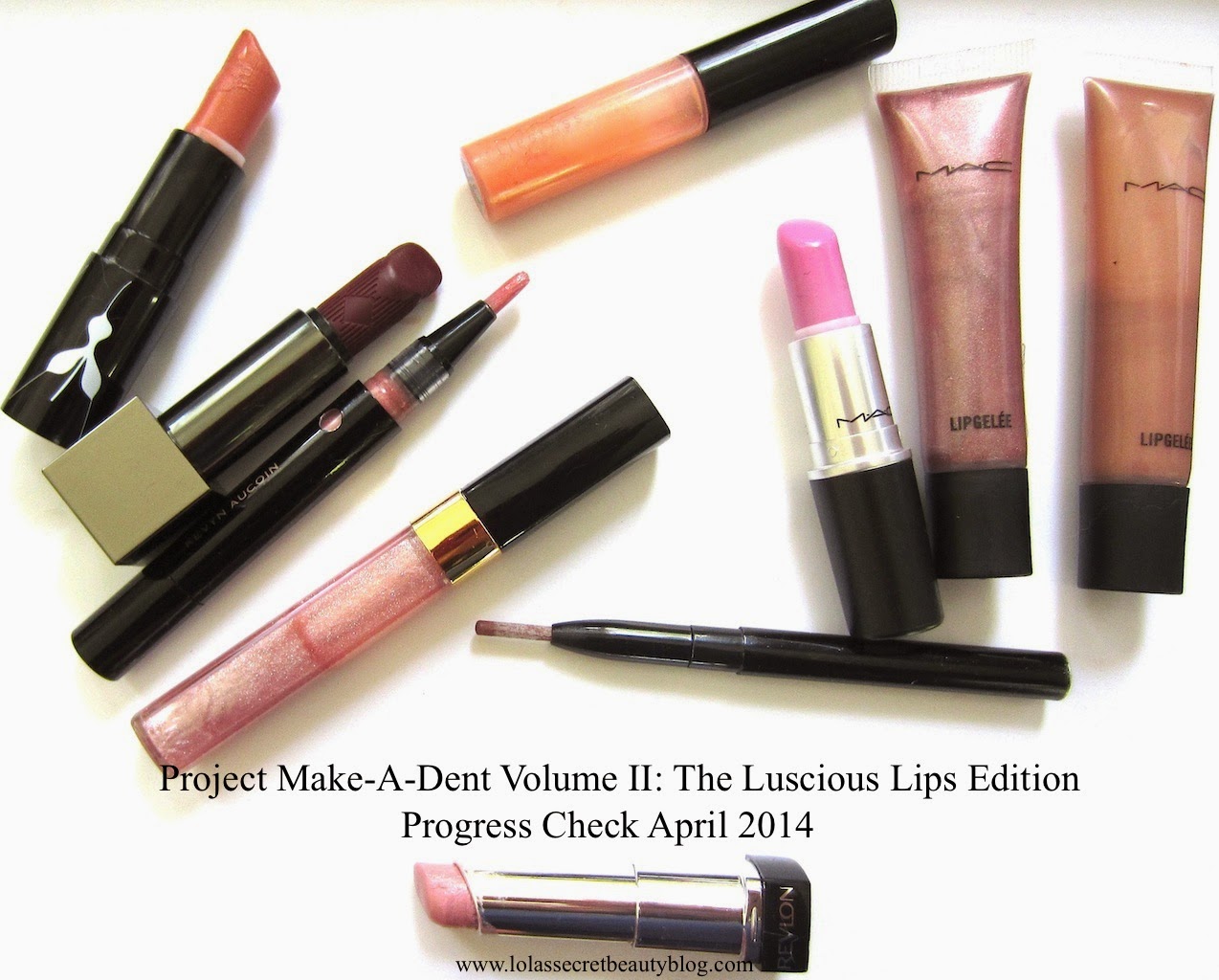 Each month following the initial reveal of my chosen items, I showed you my progress to keep me motivated-- and hopefully to motivate you to join me on this quest. This is what my initial post look like in October 2013, and what it looked like when I completed my first Project Make-A-Dent in February 2014. As you can see, I finished 5 out of the 9 items that I had selected! I then asked you whether you wanted me to pick all new products for Volume II of the project or add to the remaining products from Volume I. Between your comments and emails the overwhelming majority voted that I pick all new products-- so I did just that.

Project Make-A-Dent Volume II: The Luscious Lips Edition came about because I have so many lip products, many of which haven't seen the light of day in eons, that it seemed like the logical choice for Volume II. You will note that I chose a disproportionately large number of MAC lip products because they have been very neglected for a very long time. I have backups of a many of these items-- namely the Chanel Glossimer in Star, the Shu Lip Liner, the Kevyn Aucoin Liquid Pen in Peonine, MAC Evolution Revolution, MAC Lip Gelée in Amber Russe and the Revlon Lip Butter in Sugar Frosting-- therefore I wanted to use them up since I have more in-waiting. 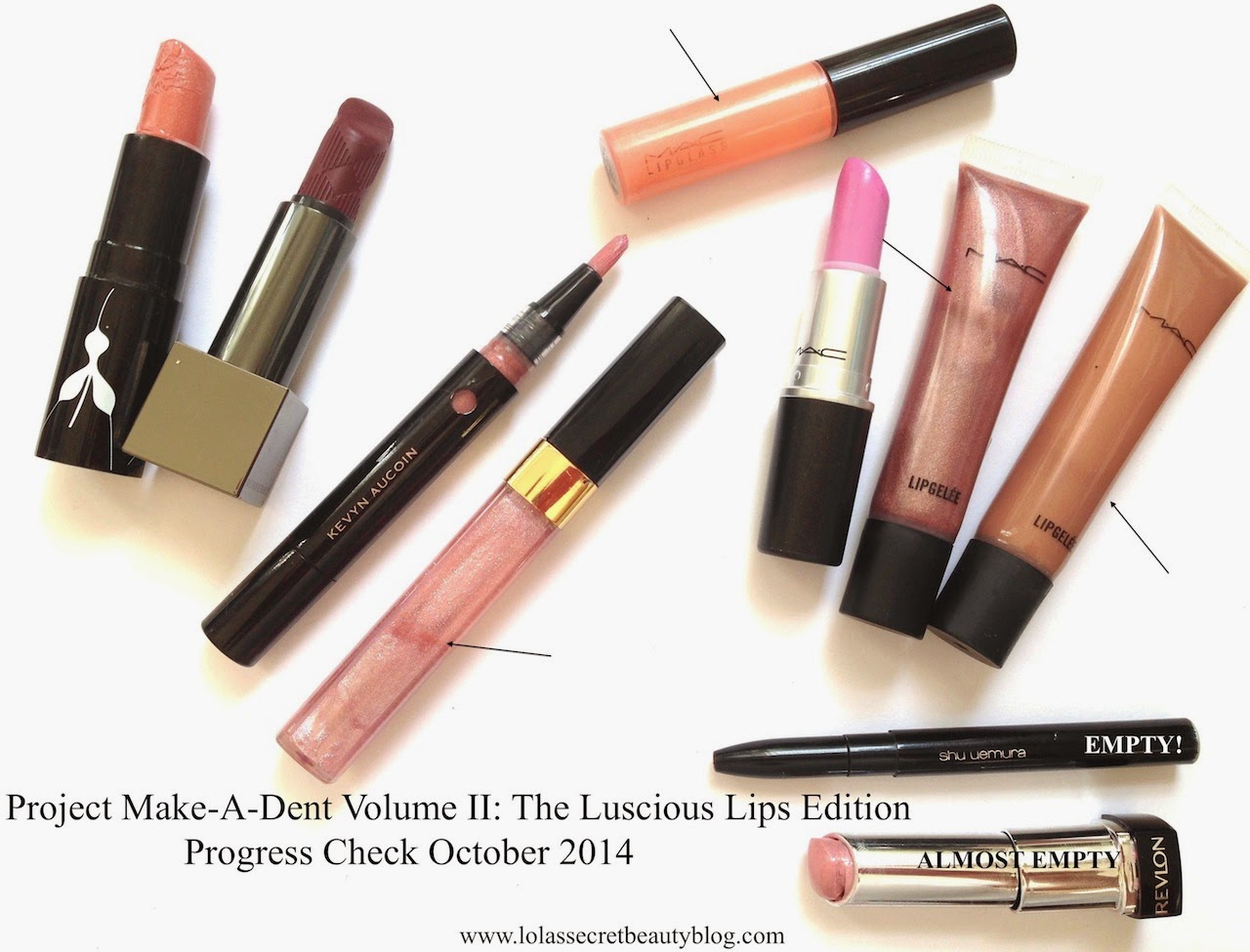 My progress in October: In the many months since I posted my reveal for The Luscious Lips Edition, I have done a fairly poor job using some of the products featured. I actually did use everything, but some things with far less frequency than others. The greatest dent that I made was with the She Uemura Lip Liner because I actually finished it! The Revlon Lip Butter, which I carried in my purse and used with some regularity, is almost finished. I did use the MAC Lipglass enough to see a slight denting, as was the case with the MAC Lip Gelée in Sapilicious, and the Chanel Glossimer. The remaining products, while used periodically, were not reached for enough to show any real wear. In the spirit of full disclosure, I only reached for the Kevyn Aucoin lip gloss a couple of times.

I should also note that I caught a pernicious bug, that kept me down for two weeks, and from which I am only now beginning to emerge. Therefore, during this time I wore no makeup whatsoever-- further slowing down my progress.

This is not just for me, but it is also a challenge to you to join me in Project Make-A-Dent. Everybody is welcome to participate (and you do not have to be a blogger). If you are active in social media then let's use the hashtag:#projectmakeadent, but no worries if you aren't. My Twitter handle: @lolassecret
Check the #projectmakeadent hashtag to see who else has joined this project-- you should too!


Have you used up any of your makeup lately? Do you want to join us in this project?

Copyright © 2014 www.lolassecretbeautyblog.com All Rights Reserved.
Posted by lola seicento at 7:02 AM